Satadru Sarkar finished his Bachelor’s in Computer Science and joined Microsoft as a Support Engineer. But his heart was in Mobile Development. After nearly 2 years at Microsoft, he decided to follow his dream and take the leap. He left Microsoft to follow his passion. More about his journey in this Dev Story. 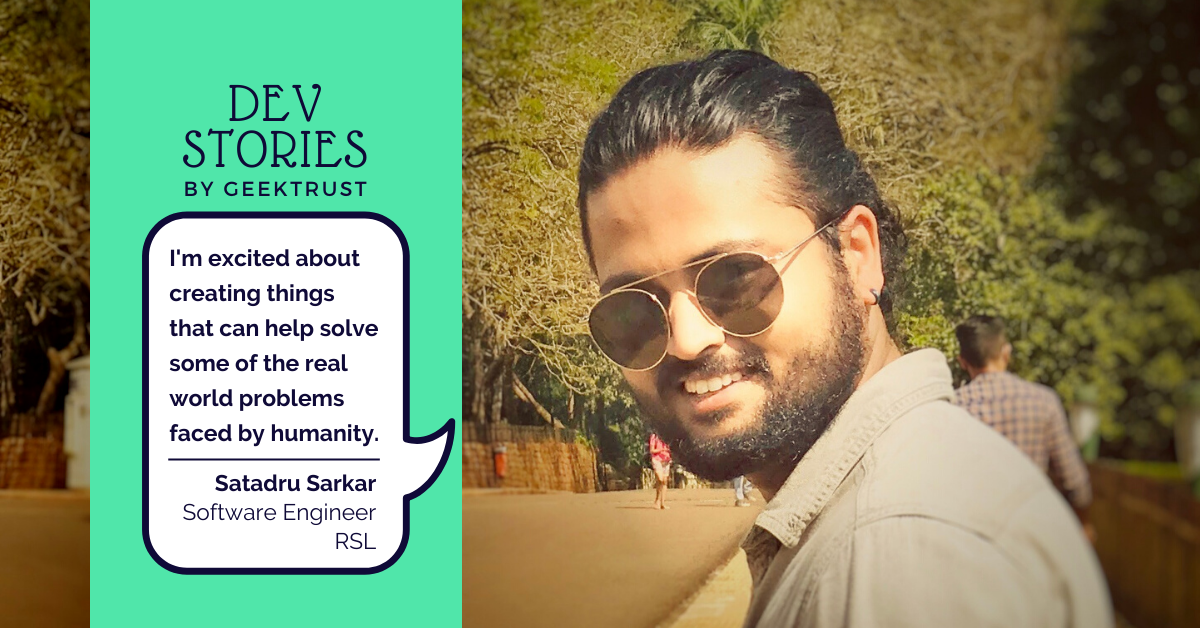 How did you start programming? What about it gives you a kick?

As a child I was always inclined towards technology. I was fascinated with electronic gadgets and wondered how they worked. I remember disassembling a spare TV and a radio when I was in seventh standard, just to see what’s going on behind the scenes. I was not able to put it back together though.

As I grew up, I came to know that software is the thing that puts life in all the fascinating electronic gadgets that we see around. This was my motivation to learn programming.

I’m excited about creating things that can help solve some of the real world problems faced by humanity.

What do you like and dislike about technology or the industry?

In the software industry, we come with new technologies every day. I don’t like the fact that most of the companies look for specialists in specific technologies. They don’t look for people who are smart and technically sound, and can adapt to any challenge thrown at them.

I have seen a very few companies that put stress on logical and technical abilities, and Geektrust is definitely one of them.

I’m very much excited about mobile technologies. Intelligence is all about sensing the environment, processing and then finally acting upon it. A mobile device is equipped with all the required sensors to sense the environment, enough processing power to process it and finally, act upon it. Hence it becomes all the more interesting to develop intelligent applications on the mobile platform.

What are some interesting challenges you’ve had to solve?

The most challenging moment for me was to arrive at the decision of discontinuing the Support Engineer role at Microsoft and take the risk of pursuing a career of my choice. The decision was not that easy and the result is not at all disappointing.

Advice to your younger self

After resigning from Microsoft, I spent some time brushing up my basics and then preparing for a career of my choice. Getting a job was getting tougher for me as there was a growing career gap. I was under constant pressure as I was gradually exhausting my savings.

Some companies rejected me as soon as they saw my CV because they thought that I would not be happy with a lesser pay, though I was always ready to settle for less. There were other companies who were ready to pay me but they had huge expectations as I was a former Microsoft employee but they did not understand that I was in a support profile.

I kept a lot of patience and in the end it paid off.

Working at startups vs. MNCs

To me, it does not matter as long as you give your best and add value to the system.

What do you look forward to – aspirations/career/kind of work you want to do?

I’m doing the exact kind of job that I always wanted to do. Working as a Mobile Developer was my dream.

What do you think about the Indian tech industry and the work going on here?

When we talk of Software Industry, it starts and ends with India. Indians do IT best! Be it development, testing or support, Indians contribute the most. I think the Indian tech industry is just starting to see the tip of the iceberg. It has got a long way to go.

I had to struggle for almost 14 months. After several failed attempts, I stumbled upon Geektrust on LinkedIn. I solved the ‘Family’ problem, and companies started approaching me. This happened just like a magic. Most importantly, most of the companies on Geektrust look for logically and technically sound candidates.

I liked the philosophy behind the company: solve one problem for multiple companies rather than solving different problems for different companies. I landed my dream job and all the credit goes to Geektrust.

That’s Satadru’s story. Pretty inspiring, we say – people who chase their dream and take big risks for it. And while it took a bit of time, the company he’s joined – RSL – is one of the companies from India that works on some of the biggest mobile applications in the world. So, like he said, it more than paid off. We hope his story inspires you as much as it inspires us.

Geektrust is a platform for technologists to find interesting opportunities and shape the future of tech. We meet inspiring people and companies in our work, and we see some great code written by our users. So we started the Dev Stories series, to bring stories of different developers to the world. Hope you enjoy reading them as much as we love writing them.

If you’re passionate about programming, sign up and get started.

Would you like to be featured in our Dev Stories? Write to us at hello@geektrust.in