“Do not just complain about the quality of talent, do something about it”, reads the email signature of Konark Singhal, Founder & CEO of MountBlue.

When we talk about the quality of talent, much of the discussion is centered around the state of education in (the thousands of) colleges in India. More than a million engineers graduate every year in India, but it’s difficult to find skilled developers at the entry level. What is taught in the graduate programs doesn’t make a person skilled enough for the job market.

MountBlue offers a unique solution to the job problem, which in turn opens up a unique opportunity for experienced developers who find special joy in helping young developers find livelihoods. If you’d love to be a mentor and work at a company that’s solving one of the most painful problems of our times, read the story of MountBlue and you might want to change the world with them.

A solution turned on its head

Training and up-skilling seem to be the most obvious solutions to the skill gap. But after getting a degree, what one should ideally be able to do is to tell one’s family, “I got a job, stop worrying about me”.

This understanding of the graduate’s psyche is what distinguishes MountBlue from other job / learning platforms out there. In May 2017, with the idea of starting a bootcamp, Konark reached out to Akshay Kanthi, who had worked as a residential mentor at a peer-to-peer learning initiative called Jaaga Study, and they spoke.

Akshay talks about their conversation: “I had been thinking for some time, why do we need colleges and universities; can’t people learn on their own? Konark’s perspective was really interesting. He talked about a bootcamp model that creates industry relevant programs for developers. The interesting part was when he said let’s not come up with another training that asks people who have just spent a large sum of money on their degree, to cough up more money for training. Let’s go ahead and pay them to learn as a part of the job. I loved the idea and decided to be a part of MountBlue.”

Thus MountBlue was founded as a job platform that identifies developers with potential, hires them, upskills them via training and mentoring, and finds them good companies – companies they wouldn’t otherwise have access to, or the engineering skills to get into. And all the while paying people to learn!

The developer trainee hiring process is 2 tests and 2 rounds of interviews. Once selected, they get 3 months of training and one year of deployment at companies. Trainees get a stipend while they learn and MountBlue gets a fee when developers get placed. They work out of 91 Springboard and not a classroom, so that people can get the experience of a real workplace right from the training period. 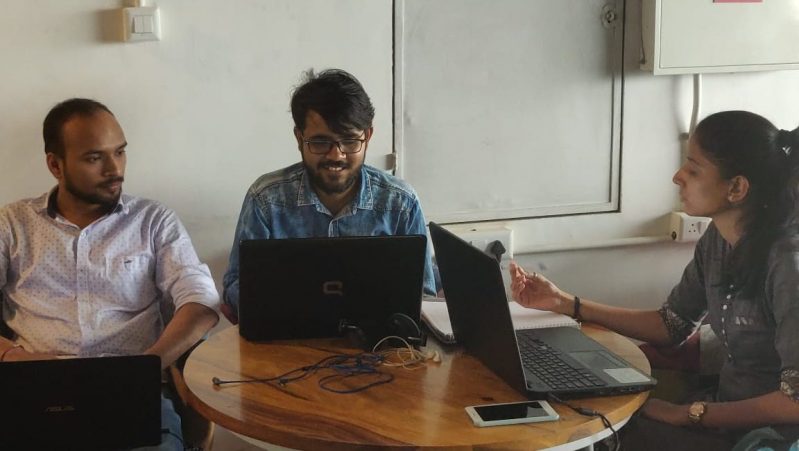 So far, MountBlue has placed over 400 entry-level developers at 100+ companies including Zomato, Cleartax, Upgrad, FreshWorks and Yourstory. At present there are around 70 trainees selected from 40K applicants. MountBlue has been growing 5-10x year-on-year, grossing a revenue of $3 million, bootstrapped.

“There are enough and more tech platforms to help people learn, but they don’t translate to big results on the ground, especially for entry-level software jobs. We don’t need to create more learning tools and resources. What’s been missing is a human-centricity. So we curate the best learning resources from what already exists out there. The trainees learn on their own, apply their learning to coding. Mentors don’t stand in front of a board and say today we are going to learn about Java. Instead they give individual attention to what each developer needs to do.”

The human interaction helps because it tells the learners exactly how they need to progress based on where they are now. This kind of mentoring is simply not possible on an online platform.

“The human element is very important in learning, more so in skill training.”

The perks of being a mentor are many. Every mentor gets equity in the company, besides 75 days of paid leave every year. But the best part must be having their evenings to themselves, free to do whatever they choose to. The work is super-flexible because MountBlue believes people should have a great life.

Konark thinks of MountBlue as a mentor-owned company where “the rest of us are here to help them do their work”.

Mentoring is not just helping to learn and reviewing code. Mentors manage their cohorts as a team just like on a real project. It’s not easy to manage a team of 15 people every day. Mentors are responsible for the people they train, so they also need to hold trainees accountable and push them to go further. In effect, mentors are pushing themselves to a management and leadership role.

The impact of the work, the challenges and the big picture

The founders of MountBlue think of it as a jobs company, not just a training company. The first industry in which they are addressing the employability problem is the software industry. The goal is to place 100K developers, after which they will tackle other fields

“If you give people jobs, they will find a way to get everything they want. They can’t say anymore that they don’t have access to health or education or sanitation or water or electricity. There are several problems society is facing and addressing them via educational reforms or creating new jobs takes a long time. What can be done now to address these problems?

We can provide jobs right now. That’s the fastest solution to the unemployment problem and most other problems.”

The biggest challenge to scaling is finding mentors who are driven by MountBlue’s mission. It’s difficult to find people who have passion for mentoring and the necessary real life development experience to mentor others. The mentor-to-student ratio in any cohort is 1:10 and maintaining this at scale is the problem MountBlue is solving now.

Last year, MountBlue started another initiative called Propel School, aimed at those who don’t clear the MountBlue test. The reason to start Propel School was that the failed candidates need learning and training even more than the others. It’s a free-of-cost 2-week program to assess potential. Since it launched, around 1000 people have attended Propel School and today, around 30% of MountBlue’s engineer intake is from the Propel program.

Who should be a mentor?

After talking to Akshay, Konark and the mentors Santu, Pramod and Ashok, we highly recommend you join MountBlue for the love of mentoring and nothing else. There could be other reasons too, like all the free time. But you have to love mentoring.

Here are some mentor stories to give you an idea.

Akshay studied Chemical Engineering in college and left it to help start a peer-to-peer residential learning space. He liked computer science so he learnt it himself, worked as a freelancer, and even mentored before starting up with MountBlue.

“I always wanted to mentor. Personally, I did not like college. I felt it kills the joy of learning. Around 2012-2013, learning platforms were coming up, making the best of online content across universities, available for free. Then the question was, should all universities shut down because I’m getting much better content online? I was interested in the learning space. So MountBlue was a perfect fit.”

Santu, a developer with 8 years of experience, has been a mentor here for over 1.5 years. In this time, he has taken 3 or 4 breaks to pursue other things, but he keeps coming back. “I would still like to do coding. I see this job as a way of helping other people become software engineers and spreading my addiction. I like programming. In an ideal scenario, I want to do both – coding and mentoring.”

“A lot of people are doing engineering but they are not enjoying it. They don’t get to feel the joy of learning. Because they don’t get to appreciate the science and the math – there’s so much underneath the surface that we don’t learn in the normal course of things. I was missing out on the interesting part of learning and wanted to do something about making learning interesting for others.”

At his previous job, he was building software for an edutech company, but he found that direct involvement in the education aspect of edutech was almost nil. “MountBlue gives me a combination of development and mentoring. It’s a learning experience as well – working with people, figuring out how to make learning efficient, breaking a big problem down into bite-sized pieces and keeping up with the latest technological developments.”

Ashok joined MountBlue as a mentor in 2018 after spending 5 years working at 2 startups..

“After graduation, I found a lot of interesting startups I wanted to work at, but they all asked for skills. This gap exists because companies want skills that we don’t get from college. This can probably be acquired by studying for 3-4 months but people don’t know the right path. MountBlue is a great solution for people like me. You get to fill the skill gap, the stipend is enough to live in Bangalore and you get a job at a great company. This is exactly what would have helped me when I graduated and that’s the reason I find the mentor role perfect for me.

Funny story, in my hometown, a software job means you work for TCS or Infy or Accenture. I told my parents that I work at a startup. They have no clue what it means. They think I work at a company called Startup.”

The mentors love their job. They do miss coding and developing a product and so on, but they think of what they do as something that has a bigger meaning and impact. Some of them take up part time/freelance assignments to keep active at coding. But overall, from talking to them, it feels like mentoring is a state of mind which, once you get into it, the satisfaction is incomparable to other types of work. But it’s not a job for everyone. In the past, MountBlue has had mentors who didn’t particularly enjoy mentoring, and didn’t stick around for more than 3 months. It’s a job for people who value the upside more than they miss coding.

Summing up MountBlue with this quote from Konark

“If it gladdens your heart, if you get happy from helping people excel and reach their potential, you get to do that at MountBlue. That’s why all the mentors are here, why they like working here and why I also started up.”

Do you see yourself enjoying mentoring aspiring programmers? If yes, check out the openings at MountBlue.

If working at interesting startups looks like something you want to do, check out more companies here. Or solve one of our coding challenges to get companies knocking at your door.