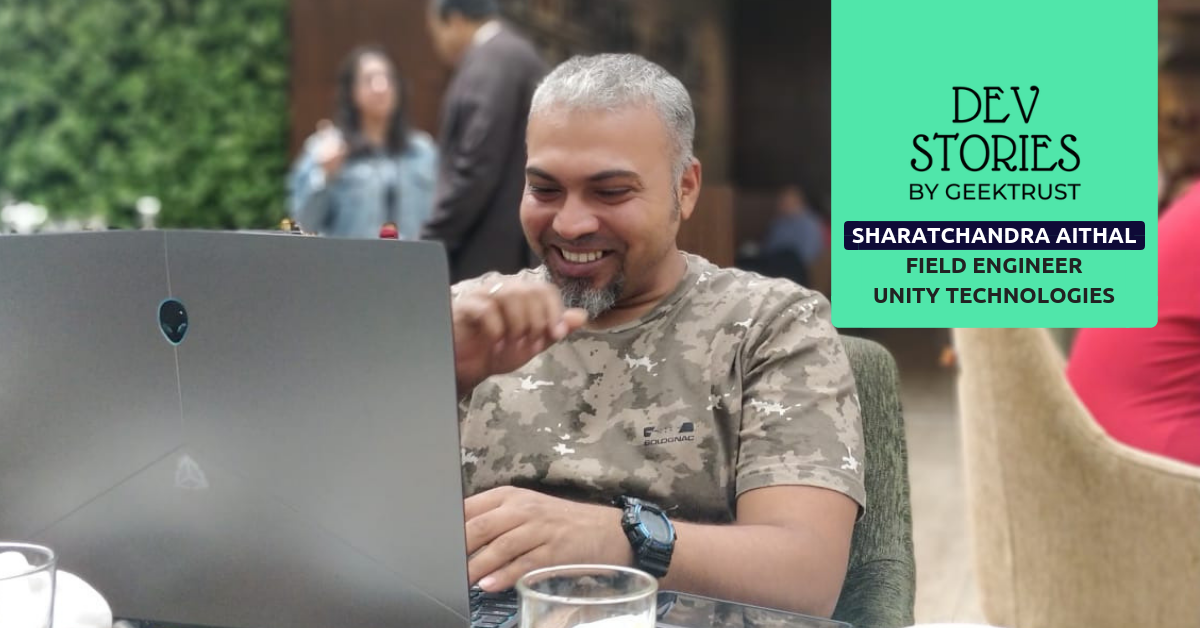 “Bringing the best of gaming into the world of science.”

That’s how Sharatchandra Aithal describes himself on Linkedin. I bet you don’t know a guy who walks around with so many super-cool gadgets with him all the time. And any time you meet him he has a story of what he’s building at the moment. The words gaming, VR, AR, simulation and visualisation are frequently heard.

He is currently a Field Engineer at Unity Technologies, the creator of the world’s most widely used real-time 3D platform. So what does his one-liner mean, you ask?

In the last 3 years, the world started using game engines for industrial applications. Solving real world problems, using gaming technology is the future, and Sharat has been deeply immersed in it from the start.

How did you start programming and what’s been your journey so far?

I always wanted to be a game programmer. While doing my Engineering in CS, I used to connect with game programmers and people interested in the field. I found out which game engines to work on and started exploring and learning along the way. My first job was as a game tester. I would go test games in the morning and come back home and play around with game engines at night.

I decided to quit my job and go do a PG in game development. It is such a dynamic field that studying on our own was the only way we could keep up. So I moved closer to college and had an amazing time getting people together and mashing up games. We made 14 games in 1 year, though the syllabus only required 9.

I immediately got a job with a startup called Xentrix Studios in Bangalore, where a lot of artists, animators and programmers work together to create CG for Hollywood studios. They had hired me to work on Unreal Engine. I designed tools that automated the design pipeline, synced how the work of 120 artists can be brought together and sent to the client. That was a huge project, which went live in Universal Studios on completion.

While at Xentrix, I had an epiphany. People in the real world require what we use in the gaming world. It would elevate solutions at all levels from envisioning the most audacious solution, to having the capability to build it creatively with gaming engines. Then one thing led to another and we started Krayonik.

How has the startup experience been?

Getting the proof of concept for using game programming for wide industrial usage – taking it beyond fun VR/AR, simulation and entertainment spaces and applying it to totally unrelated fields and making it successful – was some of the best moments in my life.

In 3.5 years, we completed 25 projects in architecture (which was perhaps the most common application of VR that we’ve all experienced in some way), marketing, manufacturing, automotive, even aerospace. We got a lot of recognition for the work we did. Out of these:

After this, the Unity opportunity became something I couldn’t and shouldn’t ignore. I had a great run at my company. But decided to join Unity full time.

Leaving your startup and going back to a full time job must have been a difficult decision to take. How did that happen?

I’ve been a Brand Ambassador for Unity for 1.5 years now, even while I was at Krayonik. My job was to keep the Unity community active – gather game developers in Bangalore, organise meetups where there would be talks as well as fun and socialising. When I got the offer from Unity to join them full time, I saw that the prospects were much bigger. Global exposure, that pushes me in a lot of directions. While I loved what I did at Krayonik, this was an opportunity I couldn’t ignore. The work is almost the same but I travel a lot more, meet a lot more bigger clients.

A lot of people around the world started using the Unity platform. The Unity dev community is #1 in Canada, #6 in the US and #7 worldwide. In the tech space today, being a Unity developer gives you an upper hand. Working at Unity is even bigger than that!

If someone is interested in gaming engines, get on to the Unity platform and get good at it. It’s exploding and demand for Unity devs is high compared to the supply. So the pay will be really good.

For me, it’s something that I’ve been working on for 10 years. So now I’m at a point where I can do real innovations with it, I also evangelise, I give guest lectures at colleges, pep talks at events and try to inspire people. It’s hard to pick up and be an expert at, but it’s well worth the effort.

I feel knowledge sharing is the biggest gift. So it’s really amazing to be at a level where I can share what I’ve learnt with others, help them, and just to be in a position of knowledge feels empowering.

A game developer needs to be a jack of all. Acquire deep knowledge about every single aspect of programming and the engine you use so you can manipulate/architect what you have now to create the end result you want.

This is one big factor that keeps me skilled. I might not know a new programming language but the job makes me learn.

I participate in a lot of Game Jams and I’ve won a few Hackathons. I won the first prize for procedural generation at GAFX 2017 and 2018. Learning widely and applying your learning constantly, even outside of your job via participation in the industry also expand your horizons and improves your craft.

You obviously love your work and have a lot of fun at work. What gives you a kick about doing what you do?

I am a lover of puzzles. I love breaking things down and bringing them back together in a better way. The satisfaction of work has been different at different times. Earlier, my high was building games, starting right from school when we used to make mod games. In college it was about hacking to get defunct things running.

Later, I got serious about game development. I love the fact that when I build something really good, it is used by thousands of people. I aided in creating the simulations for “The Battle for Metropolis” a 4D ride with laser tag, installed at the DC Universe in Florida. I feel a lot of pride and happiness when I look at my work. Watch Video

And I feel lucky to be working in a field that gives me ideas for diverse and deep applications, even outside of building games or the work I do. I had another epiphany while looking into the VR/AR applications of gaming. I created an algorithm that listens to sound and converts it into visuals that can be mapped onto a multilayer environment.

This is different from regular sound-responsive visualisations because I made a full frequency analyser which I personally wrote code for and tweaked and perfected to such an extent that I know what will be the outcome even a 0.01 difference in the audio can bring about. Once this was ready, I tested it quite extensively at small events, concerts and EDM gigs. And launched a project called B1nary Fragmentati0n. So now I see full stages lit up with the algorithm I created and I experiment with it a lot. I get to see people’s reactions on the spot and I get great feedback. I never imagined being a visual artist but quite out of the blue, I became a game dev by day and visual artist by night.

What is the potential of the tech that you love and use today?

Gaming engines and what we call XR tech – AR, VR and MR – these 3 palettes are going to create all the new age computing mechanisms. We’re not going to have screens in a few years. Screens are going to be extended into our reality. Setting foot into the future early has always been the case for my interest in technology. And gaming is always at the forefront of the future because that’s the area where everything we that flows into mainstream tech is tested first. For example, way before Skype was launched, it was a chat application inside games. Even 5G. The bandwidth test happens in games because they need to support high end hardware, performance and graphics to make sure it withstands the demands of the gaming world to perform well in the real world.

Startup vs. MNC: Which would you pick and what’s the culture at Unity like?

Unity isn’t exactly a startup though it’s a small company with just 3.5K employees. But if you look at the tech that we build here and the culture, it is pretty much like a startup than an MNC. I have so far loved the startup culture and at Unity it’s the next level, mature version of that.

I love working at Unity because it’s so damn flat that I can even talk to the CEO. At the Copenhagen Hack Week, I saw the CTO at a party and I went and said hi. He talked to me for 10 minutes and welcomed me to the company. I can’t find this kind of a vibe in other companies. I think I’m going to be here for a long time.

Where is the Indian tech industry in the kind of work you do?

A lot of companies are already working in AR/VR. And this is powered by gaming engines to do realtime rendering. What we saw in movies like Minority Report years ago, perhaps is becoming real today. 5 years from now, 30% of all tech advancements are going to be built with realtime rendering.

What have you learnt besides tech, that you can pass on to others?

Maybe a few rules of thumb I always stuck to, will help:

That’s the story of Sharatchandra Aithal the guy who wears many different hats and performs well in all without fatigue. Maybe when you pursue your passion and are so completely in love with what you do, you will always be ready to go do big things and nothing can stop you.

Geektrust is a platform for technologists to find interesting opportunities and shape the future of tech. We meet inspiring people and companies in our work, and we see some great code written by our users. So we started the Dev Stories series, to bring stories of different developers to the world. Hope you enjoy reading them as much as we love writing them.

If you’re passionate about programming, sign up and get started.